Cal Poly Debate and a Tradition of Excellence 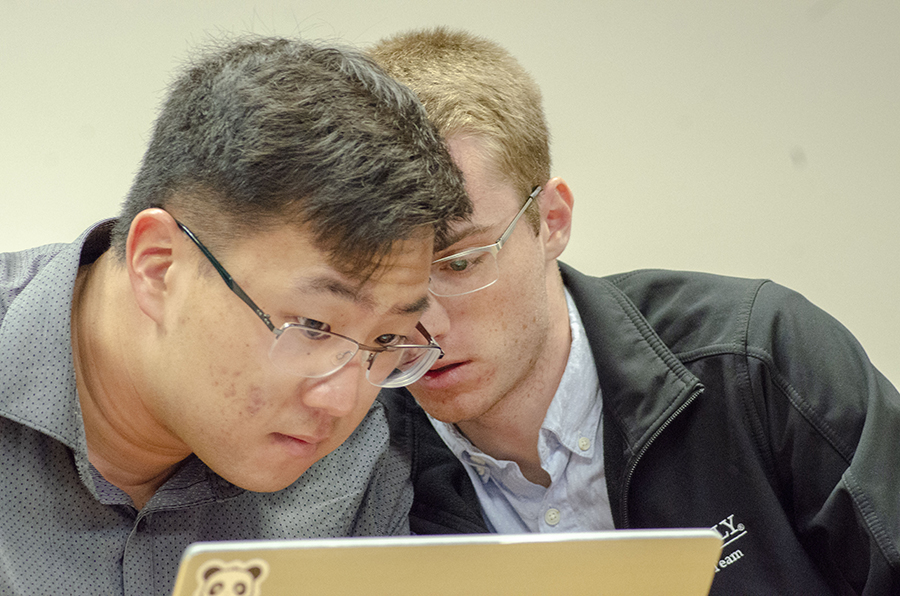 Sophomore Brandon Chong and Senior Ryan Hund prepare to
respond to arguments posed by George Washington University
at a civic debate event on the topic of school walkouts.
Chong and Hund ended the event as semi-finalists.

Over the past five years, the Cal Poly Debate Team became a force in the U.S. Universities Debate Association tournament circuit (USUDC). In 2013, the Cal Poly Debate Team transitioned from the national and regional policy debate circuits to the new format. As trends in the debate community changed, forensics director Chris Skiles determined that adaptation was the key to running a successful program. At the start of the transition, Cal Poly debaters were quarter finalists at the USU Debate Championship hosted by Purdue, finalists at the Pan American Debate Championship hosted by the University of Miami, and champions of the Pan Pacific Debate Championship and Hawaii Cup hosted by Hawaii Pacific University.

Over the next several years, Cal Poly debaters placed at a variety of national and international tournaments, won the California Cup during its inaugural year, and earned USUDC titles at competitions hosted by Morehouse College and the University of Alaska, Anchorage. Over this same period, Cal Poly’s coaching staff was invited to teach advocacy training seminars around the world, and Cal Poly added Spanish language debating to its lineup. This was a rousing success, with Cal Poly debaters finishing the 2017 Spanish language world debate championships (CEMUDE) as finalists in the Spanish as a second language division.

Recently, a new trend in academic debating has emerged and our program is embracing it. During the 20th century, university debating trended away from civic engagement and toward insular tournament circuit competitions in which debates were judged by former debaters. Today many debate programs are choosing to host events and competitions that engage a civic issue for an invested audience, providing debates for audiences that needed or wanted to engage with issues important to their community. In 2017, the Cal Poly debate team participated in the Morehouse College Social Justice Debates. The topic was prison reform, and the debates were judged by lawyers, police officers, prison administrators, judges, community organizers and Black Lives Matter activists. Cal Poly students finished the event as semi-finalists, and those who attended the event remarked that the feedback they received on their arguments was exceptionally useful and thoughtful. With this initial success under our belts, the English division of the Cal Poly debate team is committed to being a part of the emerging tradition of Civic Debating and will participate in a variety of events that are meant to offer excellent educational experiences for our students and service to communities in need of civil civic discourse.